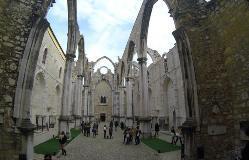 The red roofs are the crowns of the seven’ Lisbon hills, but paradoxically it is the lack of roof that makes the former Carmelite Church one of the most fascinating objects in the Portuguese capital.
The gratitute, the gothic style and the testimony of the great tragedyt hat struck the city in the 18th century those are only some part of the terms that we could use to describe this intriguing complex.
There is a question , but what is it about?
Did those shameless ruinst  permanenentaly became part of the urban panorama because of the budżet cuts?
Or maybe this post-apocalyptic skeleton rem ind sus of the fragility of life and the powerful force of nature?

To be continued... read part 2