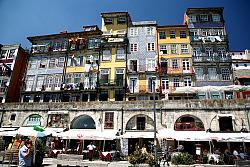 Sometimes it happens that during travelling we don’t have enough time to see everything we would like. Below I would like to show you my proposal of places to see in Porto during one day.

The first stop can be Rua Santa Caterina which is a long street with many shops and the most important with Majestic Café. Before starting a few hours of sightseeing it is worth stopping over there for coffee or just to eat something sweet. Majestic Café is one of the oldest café in Porto. It was established in 1921 and in the beginning was the place for elite like politicians or artists.

Next, it is worth climbing slightly up and go to the nearby church of St. Ildenfonso which was founded in 18th century. It’s a perfect place for fans of azulejos because the church façade is decorated with numerous white and blue tiles. 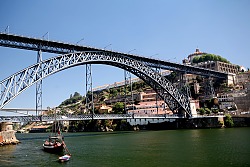 Then at least for a moment you should stop at the Sao Bento train station which is considered one of the most beautiful train station in Portugal because of azulejos decorating its interior. They show us the most important moments related to the history of Portugal and ordinary lives of people.

A further direction that it is worth taking is Igreja and Torre dos Clerigos. The tower is considered as one of the most characteristic points of the city due to its height (around 76m). It is worth going on the top of the tower because the view of the city is breathtaking.

If you are in this area it is worth going to Igreja do Carmo. Once again it is good attraction for fans of azulejos because outer is covered with white and blue tiles. It is also good choice to enter inside the church due to rich interior.

Nearby is also one of the most famous bookstores in Porto -if not in all of Portugal which is called Livraria Lello. Inside you will feel like in another world because of fairy-tale decoration.  The ticket costs 5 euro but if you will do some shopping inside, the ticket price will be subtracted from the purchase price.

Then go in direction to Sao Bento train station and then towards to Se Cathedral. Next to it there is a viewpoint from which you can see the city with characteristic point which is Torre dos Clerigos. After passing the cathedral you will find stairs that should go down towards the river. It is worth “getting lost” for a while among narrow streets, across the hanging laundry and feel the atmosphere of the city that no Portuguese city has.

Once you get to the river, you cannot skip a short walk along Ribeira. Colorful houses, sounds of instruments played by street artists, characteristic boats- all this will allow us to forget about reality for a moment. From this place we will have an amazing view of Ponte Dom Luis I as well. 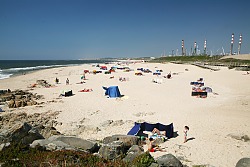 Later, go to the other side of the river. The best option is crossing the bridge on the lower part. Then be prepared for climbing up to Jardim do Moro. A beautiful view of the bridge, river and city spreads from its hill. It’s a perfect place for a picnic or just for a moment of rest from walking. However, even better view is a little higher. If you have enough power to climb a little you will find viewpoint (Miradouro Serra do Pilar). At the end it is worth going to the upper part of the bridge to the other side and for the last time admire the beautiful view.

All those who have more time, you can go by metro on Praia de Mathosinhos. The place is perfect for surfing lesson and just chilling by the ocean.