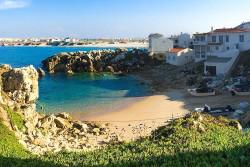 Peniche is one of the largest traditional fishing ports in Portugal and the main Atlantic center of water sports - windsurfing, kitesurfing, surfing, bodyboarding. Before heading to the beach, a visit to Peniche should include a walk around the historic center. The natural miradouro around the peninsula is also worth a trip.

Peniche and the ocean are one.

The Atlantic Ocean is still one of the main points of interest and development, and beaches in Peniche are very much appreciated. While the Consolação and Baleal bays provide a good refuge for a family day, waves on this west coast, such as Supertubos (Supertube tubular waves) at Medão Grande beach, are in high demand for surfers and bodyboarders from around the world. The town was chosen as one of the '7 wonders of Portugal' in the national tournament. It is the place of the main surfing world championships. Rip Curl Pro Portugal is an event that is part of the World Surf League Tour.