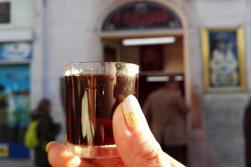 If you are in Lisbon besides places where you can try the local cuisine, drink delicious Portuguese coffee or Pastel de Nata, you cannot forget to try Portuguese liquor which is Ginjinha.

The production of the Ginjinha had already started in ancient times according to the speciel recipe from a monk who was preparing a liquor only for the medical purposes. Later it was possible to buy it almost everywhere. However, it the beginning Ginjinha was dedicated for people from higher social classes. Later was for everybody.

If you wanna try Ginjinha, the best idea is to go near Rossio square where you can find tiny bar “A Ginjinha” which was founded in 1840. Ginjinha is a mix of cherries and strong Portuguese alcohol. While you are ordering your cup you can define if you want pure Ginjinha or in presence of cherries. Some places offer drinking a Ginjinha is chocolate cup which is an attraction.

Without spending a fortune, because for around 1,5€ you can get a cup of this liquor. And if you will like it even two or three cups.  So during the sightseeing it is worth to make a break and visit this place and feel like typical person from Lisbon.

Sometime while you are walking in Alfama, you can meet locals selling their own home-made Ginjinha.